Grief and the City

Zurich-based designer and educator Lea Hofer wants us to rethink the process of mourning, and how to incorporate it into contemporary urban spaces and public discourse. To do so, she turned an old vending machine into a dispenser for unconventional objects of grief – and placed it within the largest burial grounds in the city.

The frieze inscription on the Krematorium Sihlfeld, one of the oldest crematories in Switzerland, reads: “Flamme, löse das Vergängliche auf. Befreit ist das Unsterbliche.” (‘Flame, dissolve the ephemeral. Be the immortal released.’) Characterized by abundant Jugendstil and Neoclassicist elements, the crematory monumentalizes the process of incineration. With grand imperatives, it sculpts into stone a, if not the, transcendental resolution to terrestrial human death. The early 20th century building that houses the crematory, approached frontally via a scenic chestnut lined alley, is reminiscent of how Euro-centered, hegemonic understandings of death do not leave much to an uncertain end: dissolve, release. Mourn.

As a consequence, the symbolisms and institutional practices concerning human loss – and eventually grief – tend to be equally parochial, at odds with our contemporary world and everyday life. At least, this was a foundational observation for Zurich-based designer Lea Hofer, who in the past year started working on Der Trauerautomat. For this participatory installation, she repurposed an old vending machine by redesigning its surface and filling it with objects she thought would help people think of grief in different ways. Candles, tissues or rosaries are available for a few Swiss francs, but also more unconventional things like soap bubbles, chalk crayons or artefacts designed by local artists.

Death and commodification have always gone hand in hand

Some of these products – particularly the most unusual – have been met with irritation by passers-by, who according to local media outlets found the artwork to be “irreverent”. Instead of ‘disrespectful’, Hofer likes to think of these things as ‘de-contextualised’, she explains. “The objects are supposed to evoke a reaction in the audience, to interrogate their notion of grief.” Der Trauerautomat is currently located at one of the main entrances of Friedhof Sihlfeld, the cemetery complex comprising the above-mentioned crematory. This burial ground also happens to be Zurich’s largest public park. In a city that flaunts its greenery with occasional meadows rather than meticulously planned city gardens, the gridded, landscaped grounds open to the public since 1877 retain a feel of urbanity and community.

The intersection of contemporary urban life and discourses around death and mourning was indeed particularly intriguing to Hofer. While she initially considered placing her artwork at one of the many municipal baths on Zurich’s riverbanks, the cemetery’s location opens up a discussion of the burial ground’s role in an increasingly urbanized world. What is the role of intimate commemoration in public?

Digital practices of mourning – from celebrity culture to viral videos – flood our news feeds, and the way collective memory permeates our urban spaces is also being increasingly renegotiated. However, the symbolic practices of our burial sites, especially those located within cityscapes, remain largely unchanged. This is what Hofer wants to challenge: “Death has disappeared from cities in the global North, where we believe in the contradiction that we can be young forever and that only old people die. The Trauerautomat is supposed to surface right there, where we do not expect it.”

All the products in the Trauerautomat are for sale, and those sold out are continuously refilled by Hofer herself. Her artwork thus encourages a type of interaction from its audience that brings up questions of monetary consumption in relation to grief. If grieving is an act of egoism, as Roland Barthes argues in his Mourning Diary, then why shouldn’t it be accompanied by individually tailored acts of consumption? The question appears cynical, but Hofer approaches it with disarming openness and playfulness: “Of course, death and commodification have always gone hand in hand. One of the leading business schools in Switzerland got in touch with me, and wanted to help me craft a business plan for the Trauerautomat. But monetising the project was never my intention”. Instead, the vending machine is, for Hofer, a symbol pertinent to the cityscape – allowing her to explore the possible public trajectories of a personal, complex process.

The Trauerautomat repurposes an object ordinarily associated with cheap thrills, purchased with small change, filling it with things that defy the conventional process of grief. By doing so, it precisely challenges the established transcendence of death and commemoration. It captures the practice of mourning in the everyday and the whimsical, despite – or perhaps precisely because of – its close proximity to that stony inscription on the crematory. In this way, the work directly opposes that morbid injunction to grieve, which dictates so many of our understandings of death. Hofer was surprised by this unexpectedly productive contrast, and sees in it the relevance of her project: “The Trauerautomat provokes a lot of critiques and analyses. People take pictures and send me letters, both enthused and appalled. It is an installation about death, but it is very much alive.”

Der Trauerautomat will be located at Friedhof Sihlfeld, Zurich until November 2019.

Photos of Der Trauerautomat courtesy of the artist. 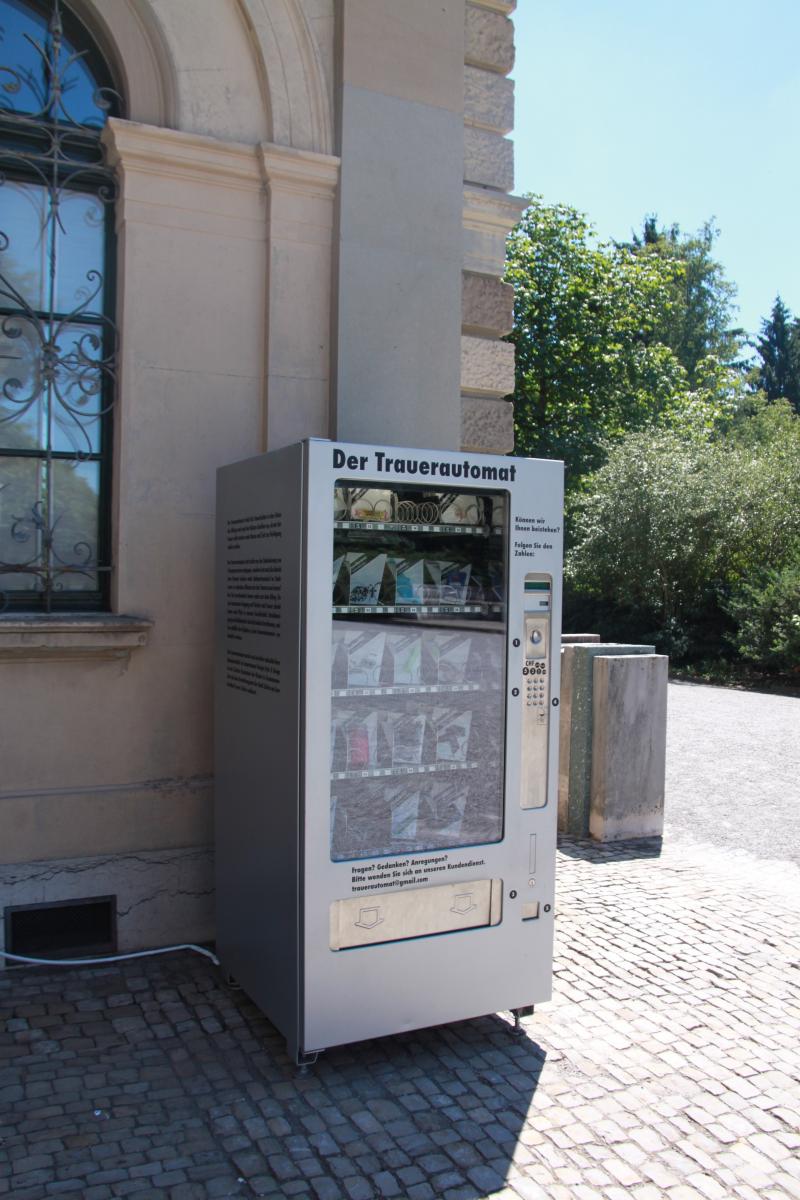 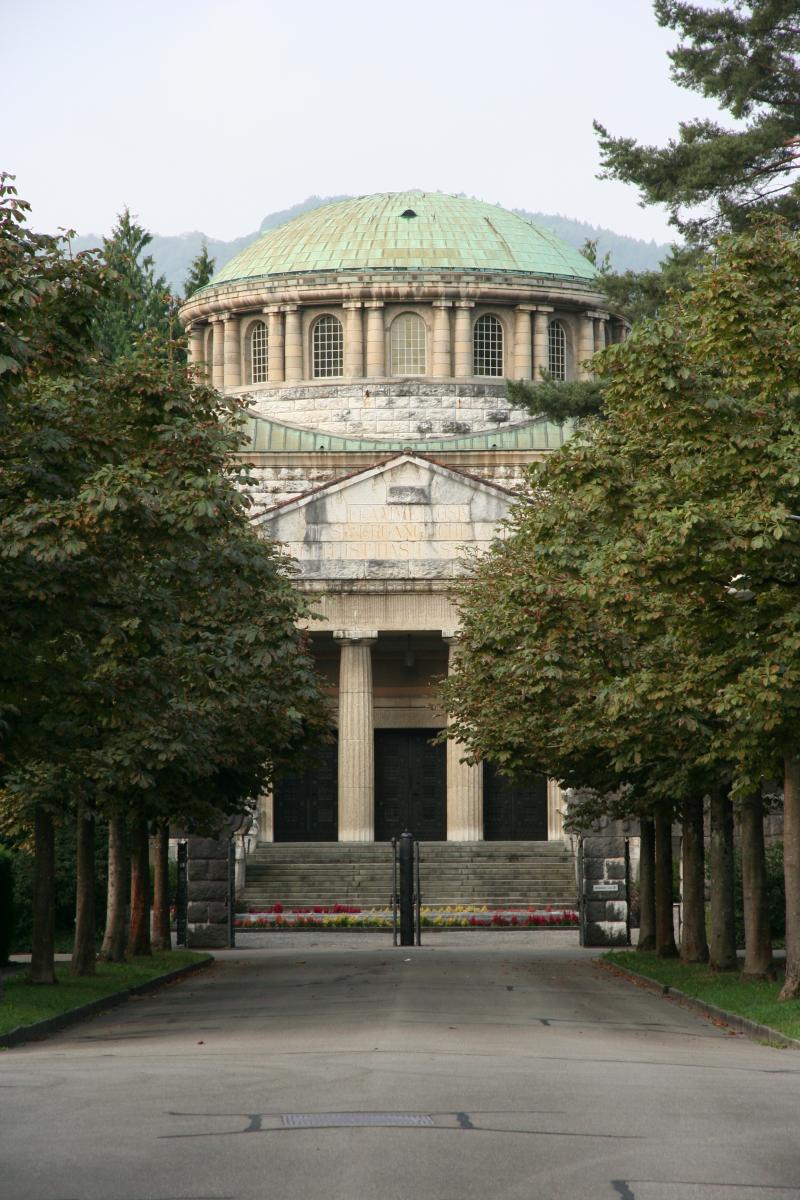 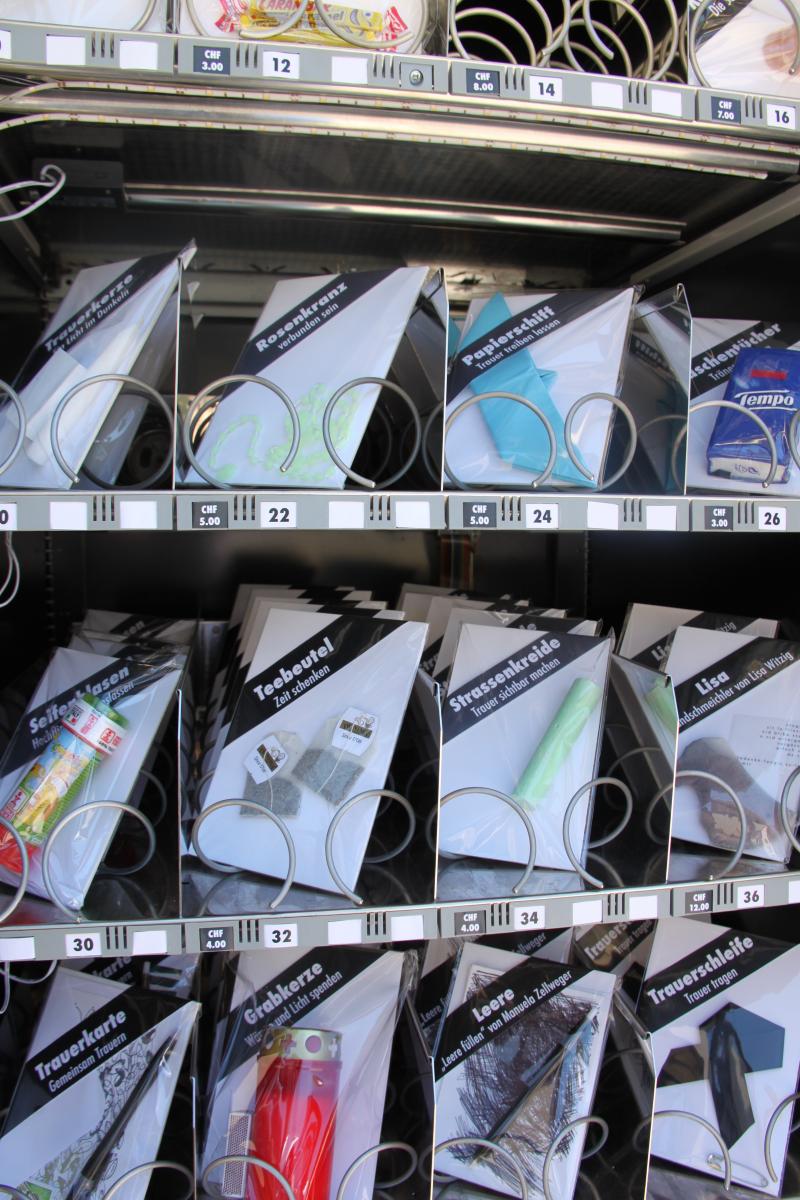