This feature is part of the series ‘Research/Practice’, which explores the intersection of academic research and/as creative practice.

See and find out more about the artworks exhibited by clicking on each artist’s name, or scroll down to the list of works below.

“it is the medium one chooses that poses the questions, rather than simply being one way to shape the answers”

How can analysis take shape? The many different artefacts collected in the exhibition Thinking Through Things each suggest their own answers to this question. Eleven students from the research masters Cultural Analysis, at the University of Amsterdam, attempted there to make their research tangible. Developing concepts and approaches to culture normally reserved for academic writing, the pieces gathered here address what is impossible to put only into words — moving their ideas off the page and beyond the academy.

These artworks, images and objects allowed the students — most of them non-professional artists — to develop skills generally incompatible with written work, finding also that the often physical and literally creative processes of sewing, sculpting, editing and drawing shed new light on the ideas already developed in their written research. Dealing with the immense stress produced during thesis writing meant that many of these projects — though themselves labour-intensive — offered a therapeutic counterpoint to the rationalism and linear, ‘causal linkage’ required by traditional academic writing.

Each piece is also a product of individual labour, thought processes and archives — based on written work covering topics as diverse as astrology, alt-right camp, smart cities, Islam Nusantara and drone cinematography. But they emerged from some common questions and compulsions: enquiries specific to the medium analysed, deeply political aims, desires to address non-academic audiences, or developments of intimate self-reflection.

For many whose analyses focused on particular media, working within that medium was the only way to understand certain things about form. Erwin Hurenkamp’s textile works, for example, could provide “the only real answer to questions of care by inanimate objects”. Unlike the ‘abstract thought’ of academic language, his emphatically touchable pillows demonstrated the importance of ‘feeling’ as a way of knowing — navigating the surfaces and spaces of daily life. The same is true for many students’ work on images and visual culture. “It is not the same experience to read about photography as it is to produce photography”, points out José Luis Viesca Rivas. His ensembles of text, shapes and images, using homemade camera obscuras, provide a palpable component to his research — making literal the visual dimensions of the concepts explored in his written work. Roselinde Bon’s photo manipulations also provide a new perspective on her thesis’ focus on the digital and urban surveillance of imaged bodies. Moving from analyst to photographer made her “part of a much larger playing field of exposure and intentional vulnerability”, offering her also a more ‘zoomed-out’ view of the power relations explored more conceptually in her written research.

Making ideas tangible in these ways often reflects a political imperative, in some works more visibly than others. Responding to missing histories of women persecuted globally through witch-hunts, Ana Mustafa’s sculptures attempt to materialise those missing bodies in an impossible unity, beyond the ‘bodiless text’. Rijk Kay’s video essay, on the other hand, emphasises the dangerous absurdity of Milo Yiannopoulos’ perversions of camp aesthetics, by reproducing the “dynamic between spectacle and spectator” where this is staged.

This project allowed students to bypass the academy’s strict and inaccessible way of discussing important cultural questions, generating more engagement with the general public. The sketches displayed by Luca Soudant are the result of a collaborative workshop, encouraging a diverse group of people, both from within and outside of the academy, to puzzle out the “immensely abstract and intangible concept” of ‘affect’, locating and challenging the quiet or obscured politics of museum spaces. Seeking to escape the ivory tower of distanced critique, those dialogues promoted an egalitarian sharing of knowledge. Similarly, Corina van Beelen’s visual works also stem from a longstanding discomfort with academic criticism’s tendency to “speak on behalf of others”, avoiding being didactic by “pointing out a narrative” of visual interpretation for others to take up on their own terms.

“the idea is not enough […] it is the process that reshapes and makes it. You are confronted with a new material that sometimes does not fit the idea, and leads you to another”

On the other hand, some of the most deeply personal pieces demonstrate the power of self-reflection in creating dialogue. Erica Moukarzel also avoided ‘spoon-feeding’ by “learning to show, not tell” through the personal and popular cultural fragments compiled in her video work. The viewer glimpses ‘inside’ her personal reactions to the lost meanings of warning signs, nightlife, and plane tracks, from Beirut to Amsterdam. But this is balanced with the ‘outside’ of discourses on Lebanon’s club culture and history of war, allowing viewers access to the ‘in-between’ — the subjective interpretations of sounds and images. Considering her own complex self-construction through listening, Isadora Ponce’s written, audio and video works otherwise “reflect the intimate relation” between her and the music of her research. At the same time, her recordings alienated her from her own voice as instead a new discussant: “I felt detached, embarrassed, as if it was not mine”.

While composed in these ways by very distinct individuals with even more distinct interests, skills and experiences, each author’s reflections nevertheless reveal a great deal of common cause in their processes. After two years learning together, these eleven students share much more than a particular vocabulary — despite some affectionately describing themselves as a ‘cult of analysis’. Among other things: a high degree of self-reflection and a sharp suspicion of orthodoxy and appearances, but combined with a striking openness to new knowledges — a kind of intellectual generosity, or humility in never having the last word.

This conviction marks each cultural analyst’s precise yet tentative practice, avoiding what Stuart Hall calls the ‘solace of closure’ [1]. It also recalls the Amsterdam School for Cultural Analysis’s unofficial mantra, ‘let the object speak back’ (paraphrasing ASCA founder Mieke Bal) [2]: a deliberate care not to ‘overwrite’ the objects of analysis with the pre-existing biases of the author or discipline. This catchphrase is rarely repeated by students without a tongue firmly held in cheek, but its logic has possibly never been as noticeable as within the gathered projects and reflections of this group. If a little hokey sounding, the ‘objects’ of these students’ written and creative projects — their objects of study, but also the objects they displayed — really do have the final say. This strangely expressive thing-power might be most obviously applicable to the collection’s more esoteric and occult explorations — Flora Woudstra Hablé’s analysis of astrology, José’s crystal refractions of concepts, and Ana’s totemic sculptures. But it’s also an idea and a force guiding the creation and continuing significance of every piece.

Giving shape to analysis means moving beyond expressing arguments in a different form, to letting the works do their own interpreting. This offered particularly clear benefits to the video essayists, whose film-objects are ordinarily some of the most un-quotable on paper — the ‘unattainable text’, as Raymond Bellour calls it [3]. Responding to this particular challenge, Ilse van der Spoel’s supercut of drone cinematography and its historical forebears seeks to go beyond merely illustrating points, by creating arguments ‘spatially’. As an editor, feeling her way towards moments of ‘audiovisual serendipity’ meant discovering a logic not only anticipated by her — “as if the images were commenting on, underlining or countering my arguments”. Reproducing the slick digital aesthetics of contemporary music videos, Flora’s video essay also grappled with the power of images as it manifests instead in the online astrological practices of her topic. Visualising the journeys of self-reflection and self-actualisation emergent there, Flora’s own images address the iconography of astrology’s ‘Cosmic Resonances’, where the self is already constituted through stars and symbols.

Ultimately, these projects’ limitations were as productive as the new opportunities for thought they provided. By “expanding thoughts and ideas to a material plane of reflexion”, José describes, his photography gave him “the capacity to understand concepts through embodied experience”. But the practical challenges posed there (darkroom chemistry, camera optics) also produced their own knowledge. As Isa noted of these creative projects, “the idea is not enough” — “it is the process that reshapes and makes it. You are confronted with a new material that sometimes does not fit the idea, and leads you to another”. Ana also points to this often forgotten power of how the act of creating art speaks back to research: “it is the medium one chooses that poses the questions, rather than simply being one way to shape the answers”.

In this sense, the exhibition begins and continues to think past the page, through things: forging associations, providing unique experiences and shedding new light on the subject matter in ways not anticipated by their creators, nor in the texts they complement. Never foreclosing the production of knowledge, these objects’ analyses continue beyond their authors, and after their work is done.

The exhibition Thinking Through Things took place 1-2 June 2018 at 4bid gallery, OT301, Amsterdam. The piece above is adapted from the introduction to the exhibition, written by co-organiser and Soapbox web editor Callum McLean, together with all of the eleven students exhibiting. Those students’ reflections on their work are both paraphrased and quoted directly in the text. 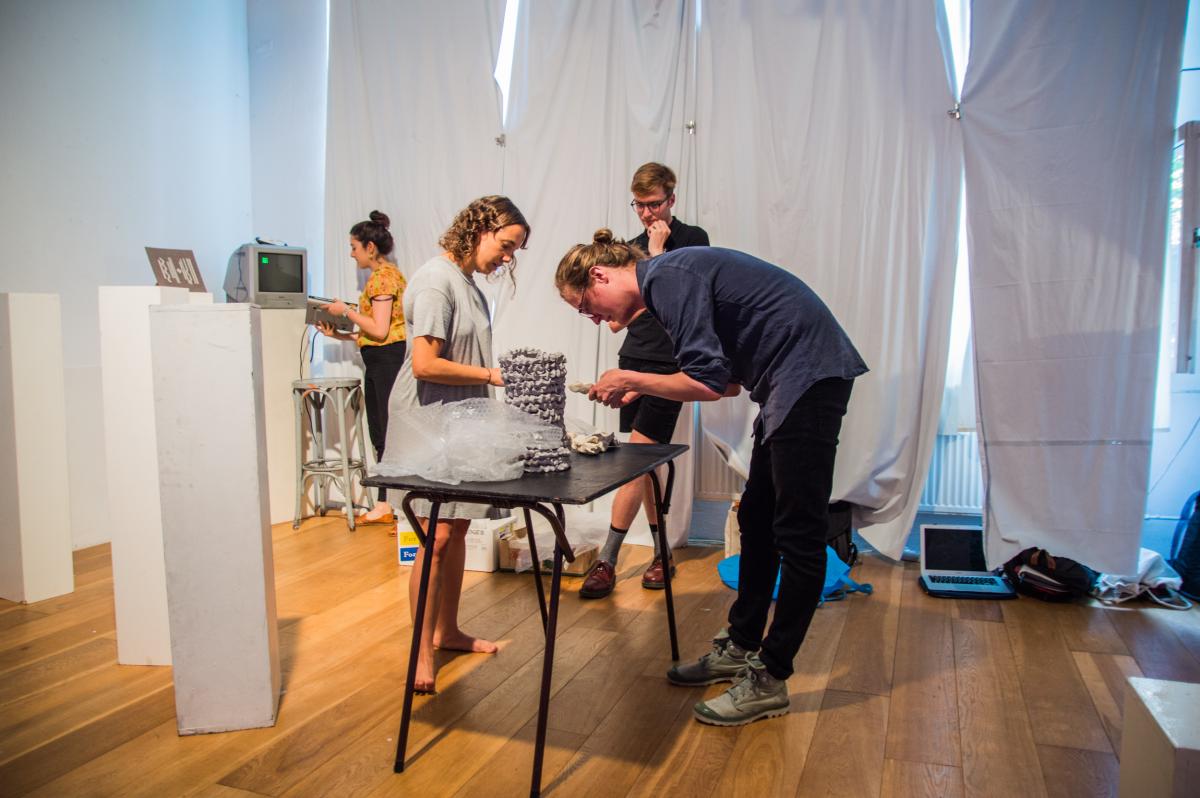 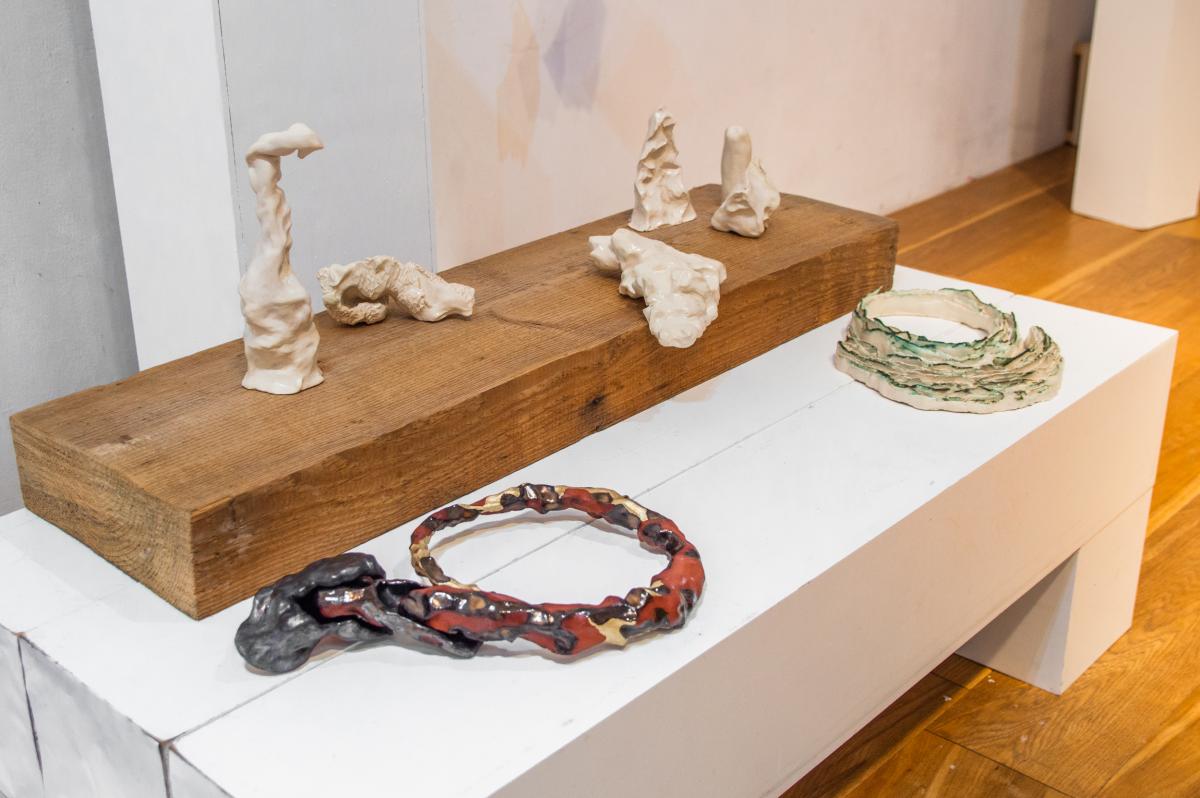 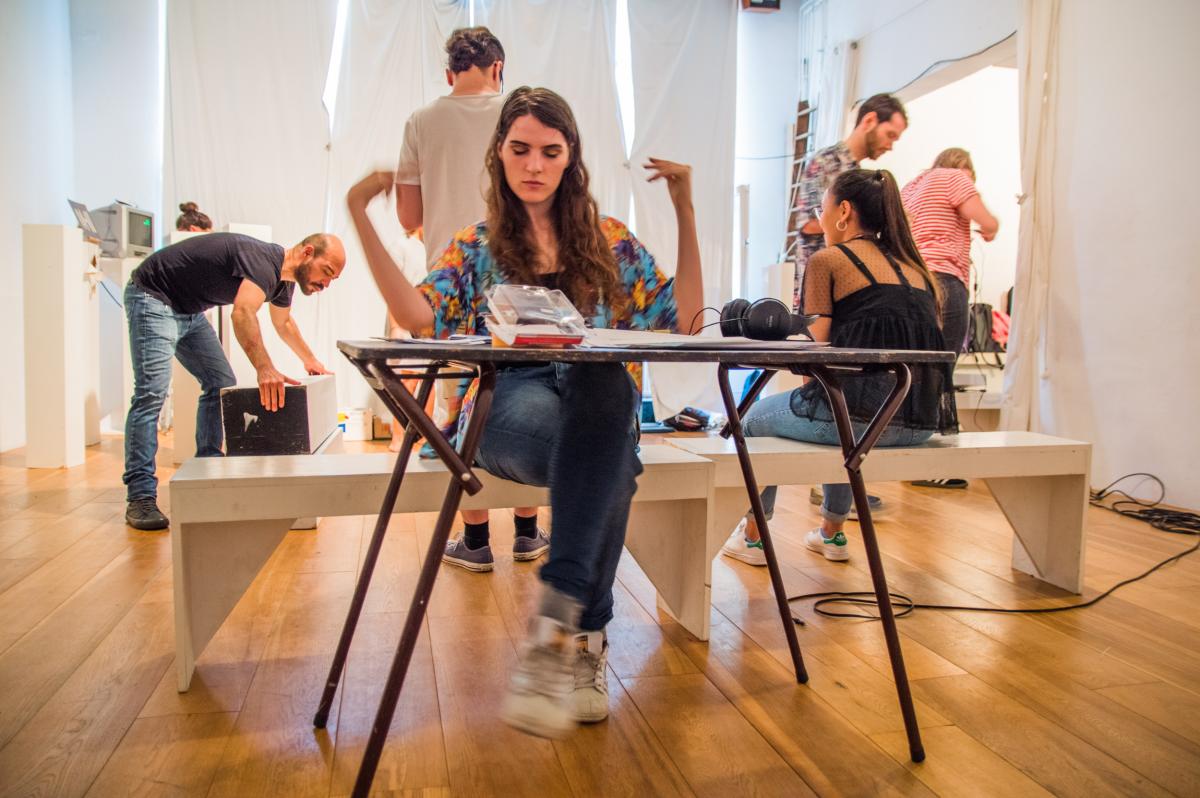 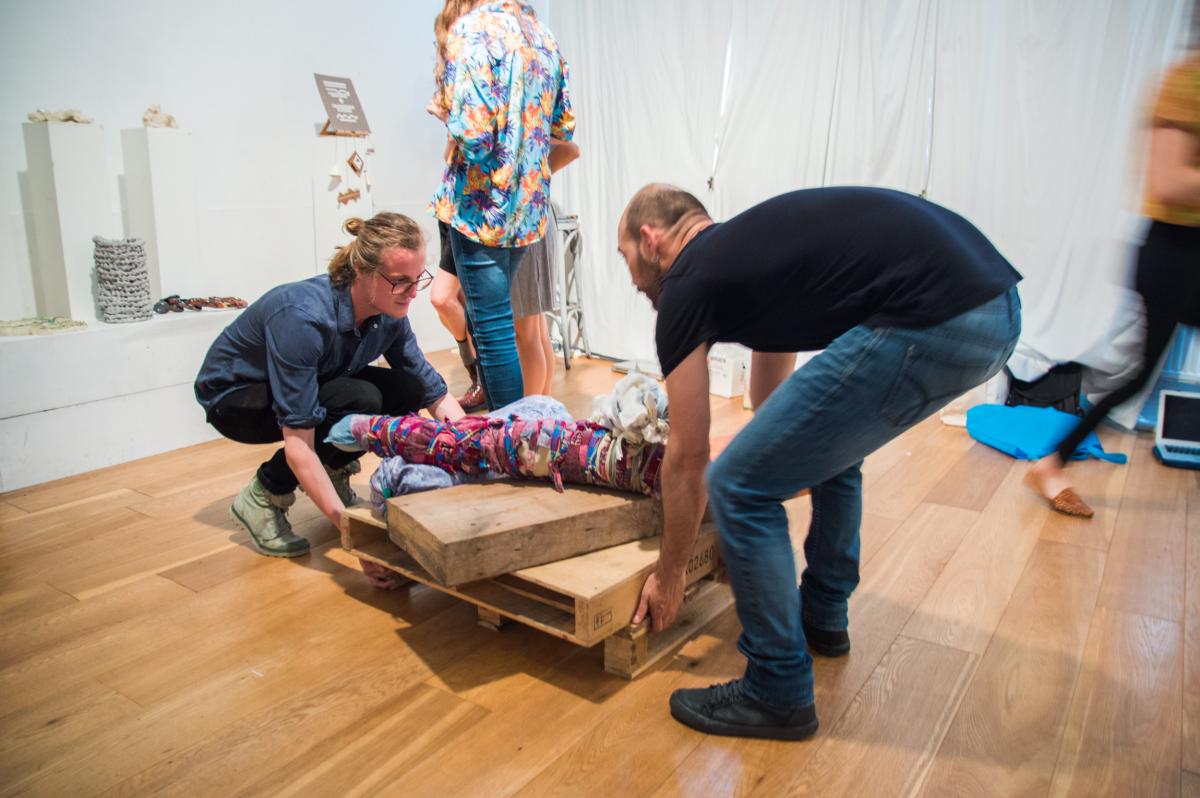 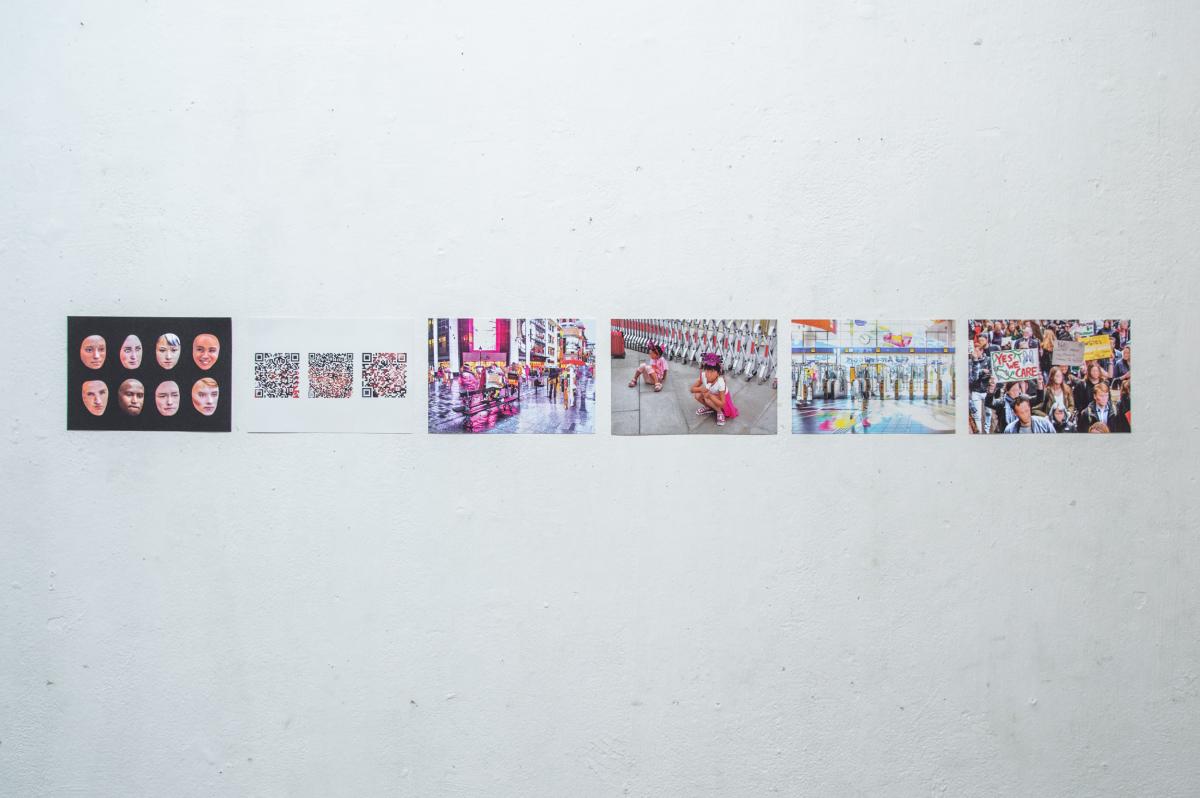 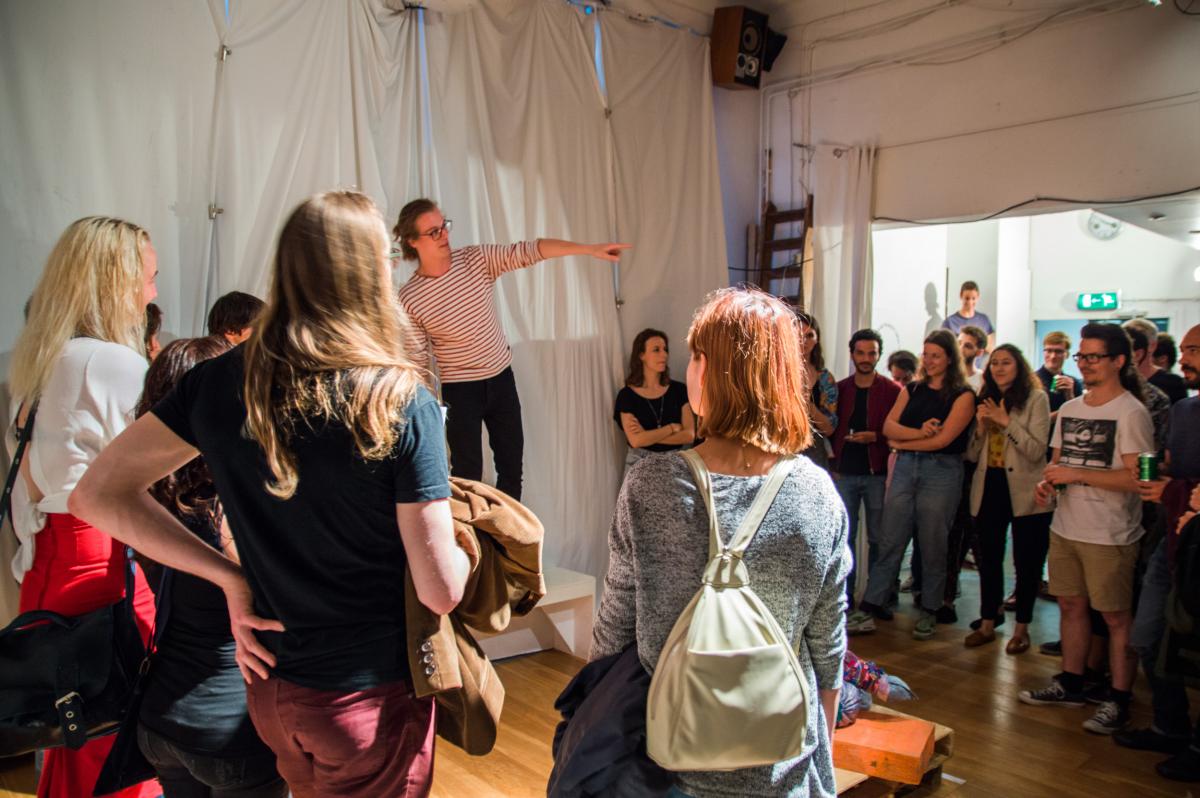 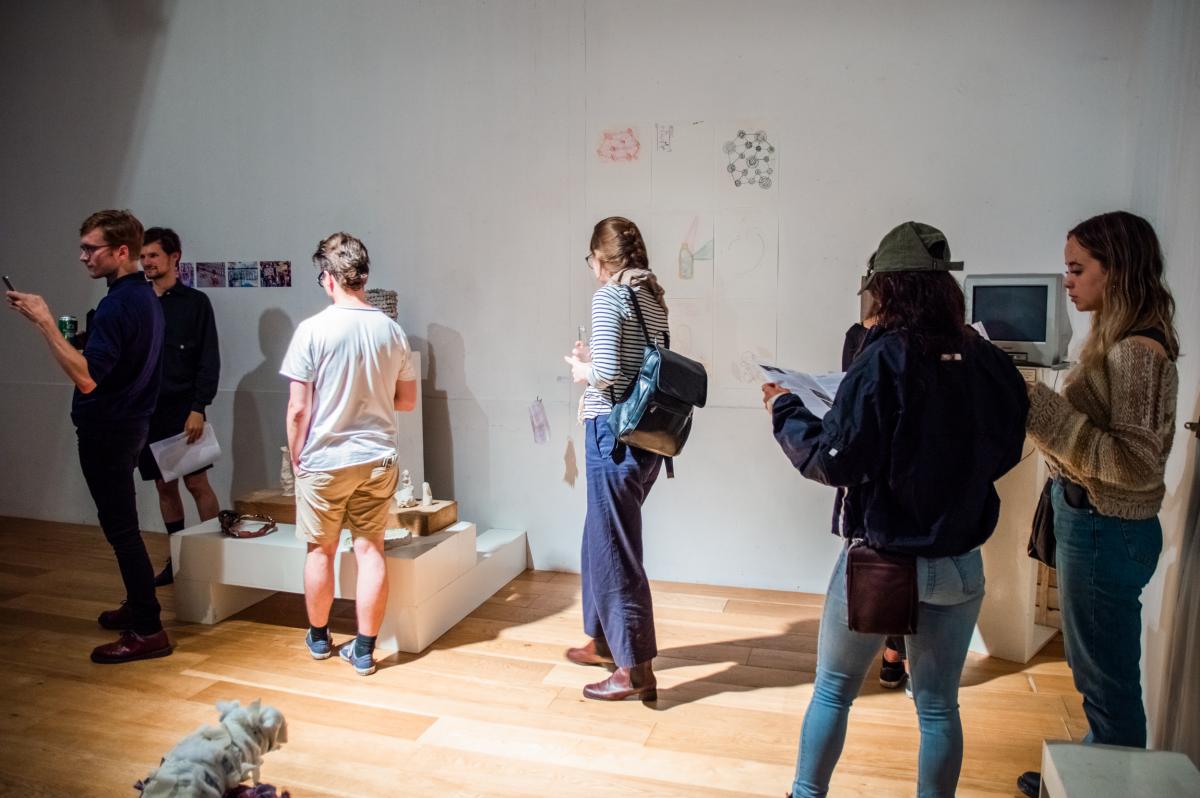 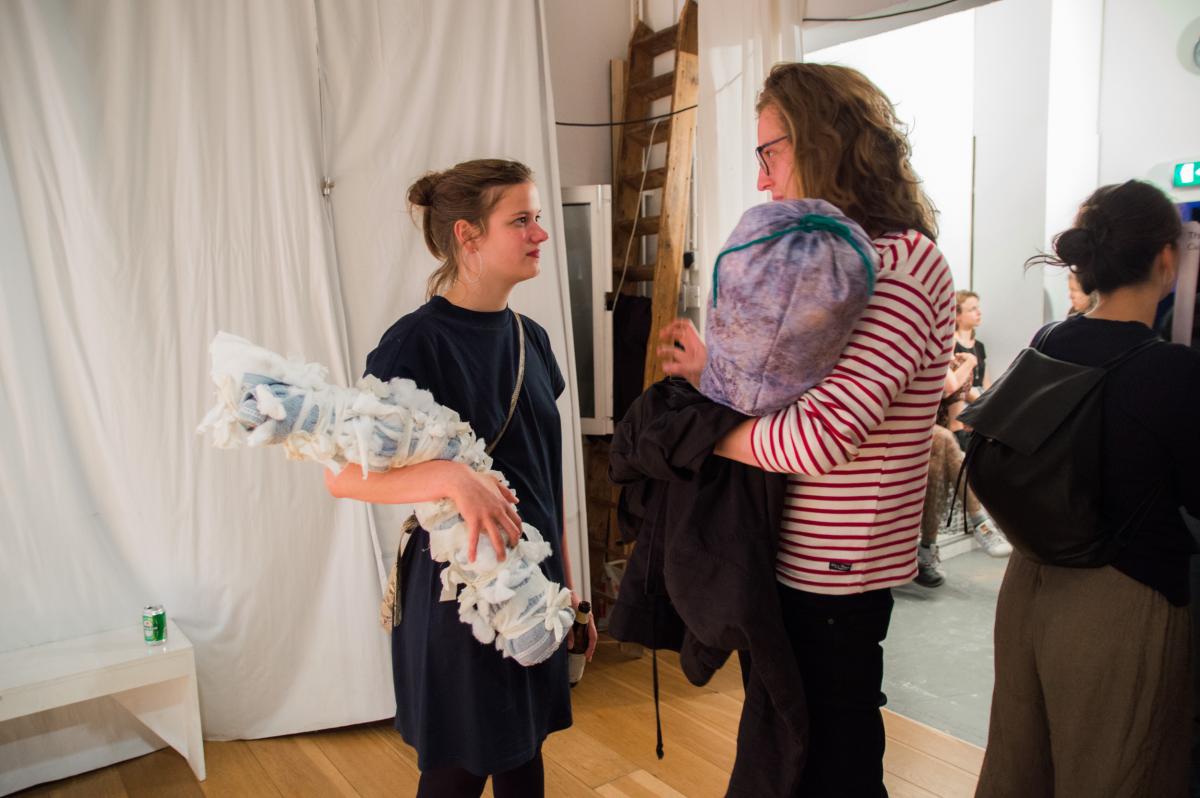 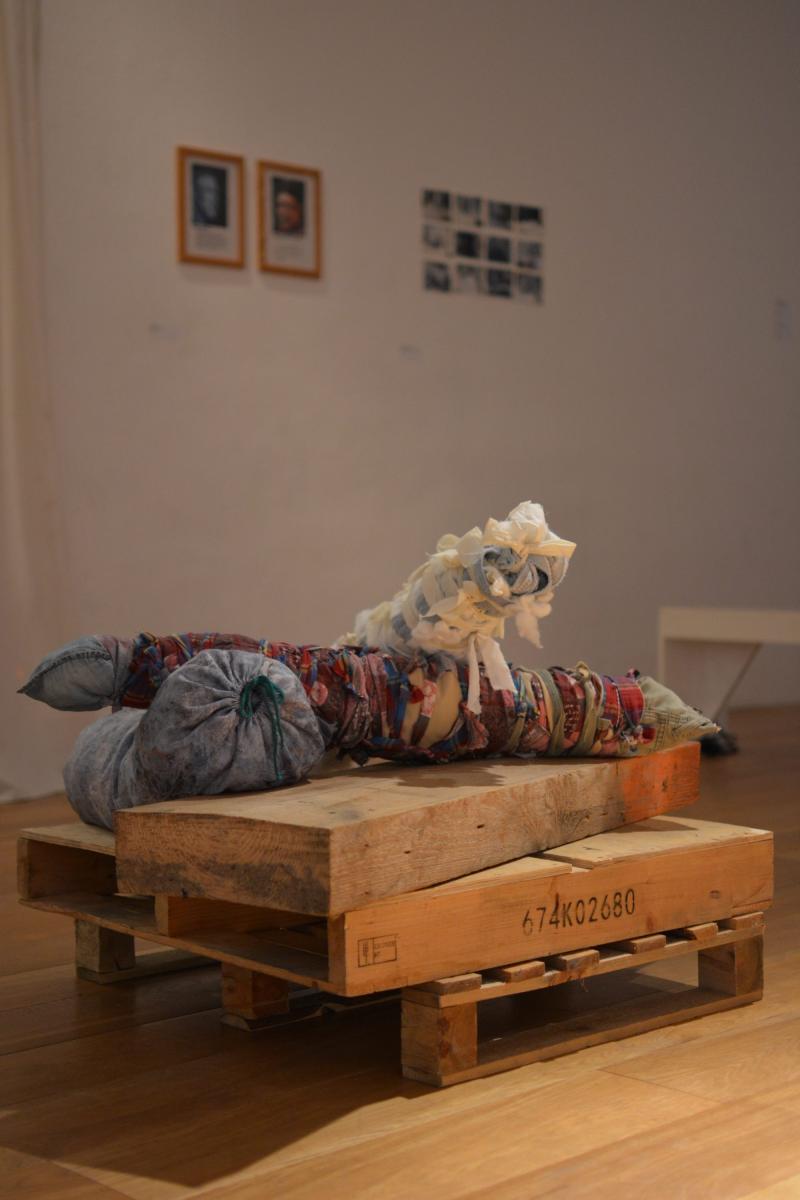 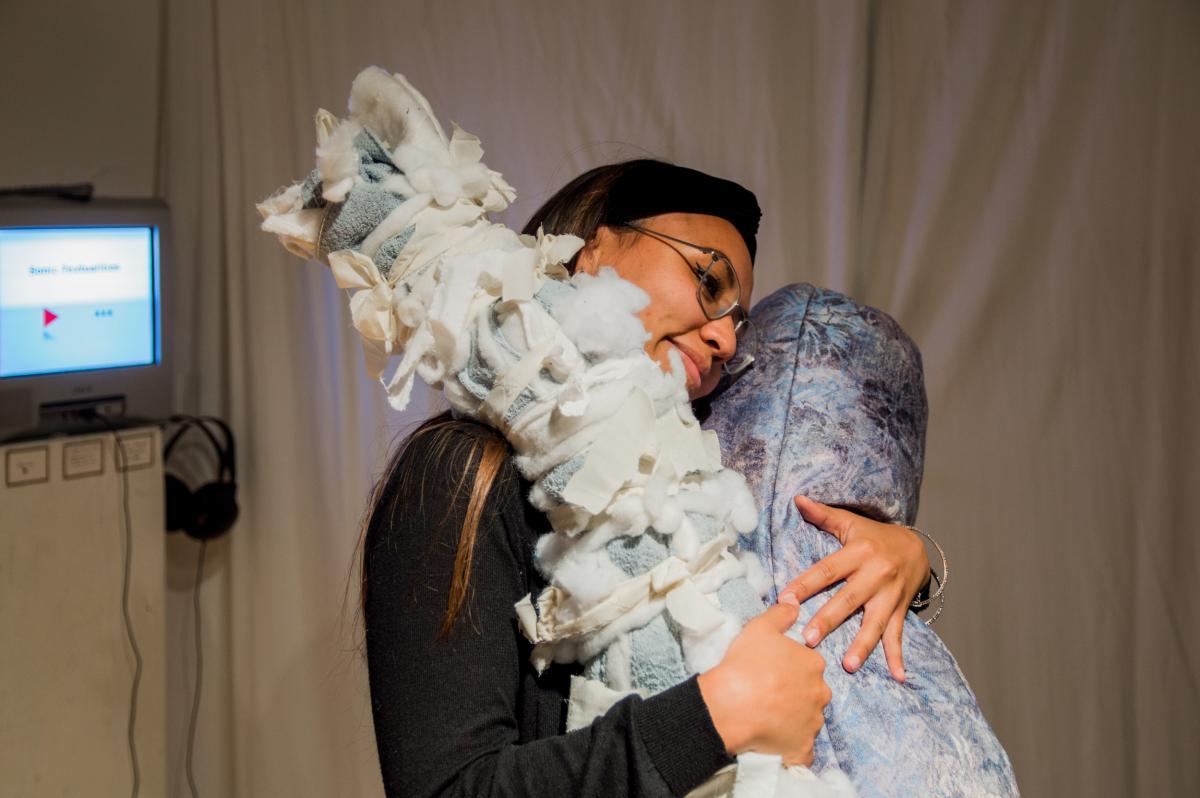 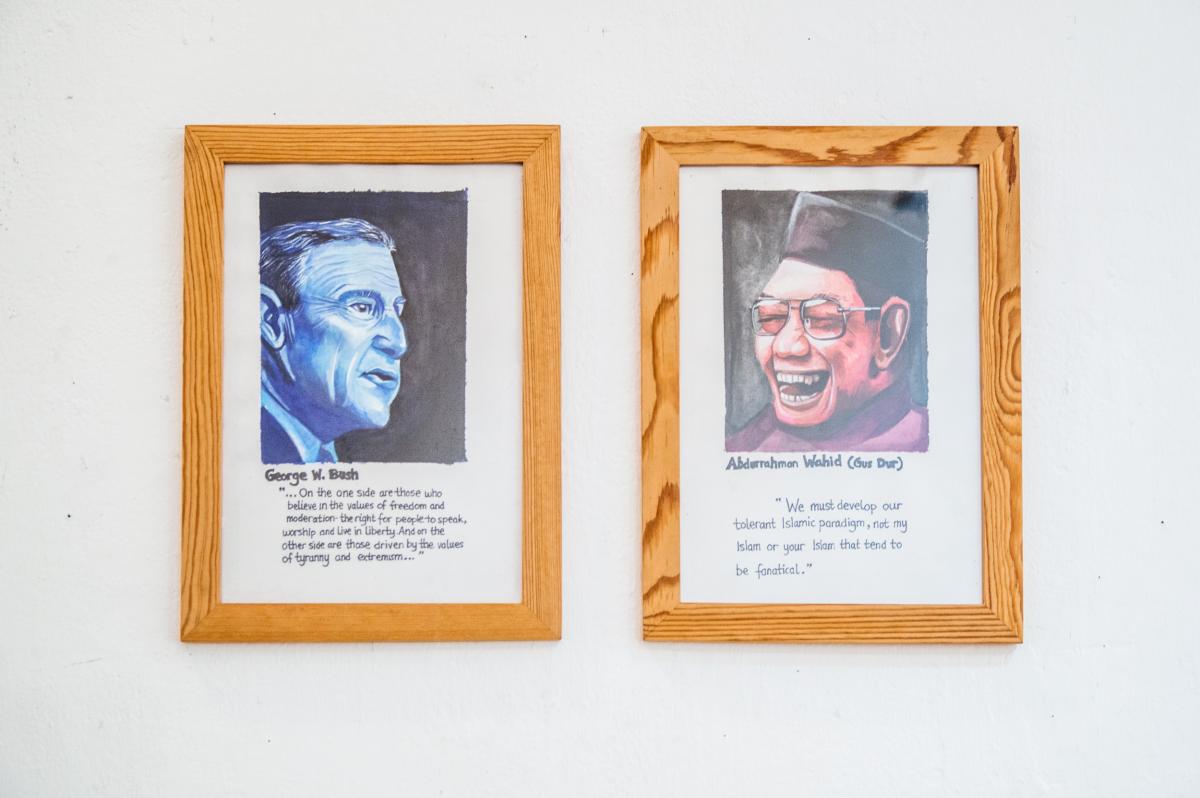 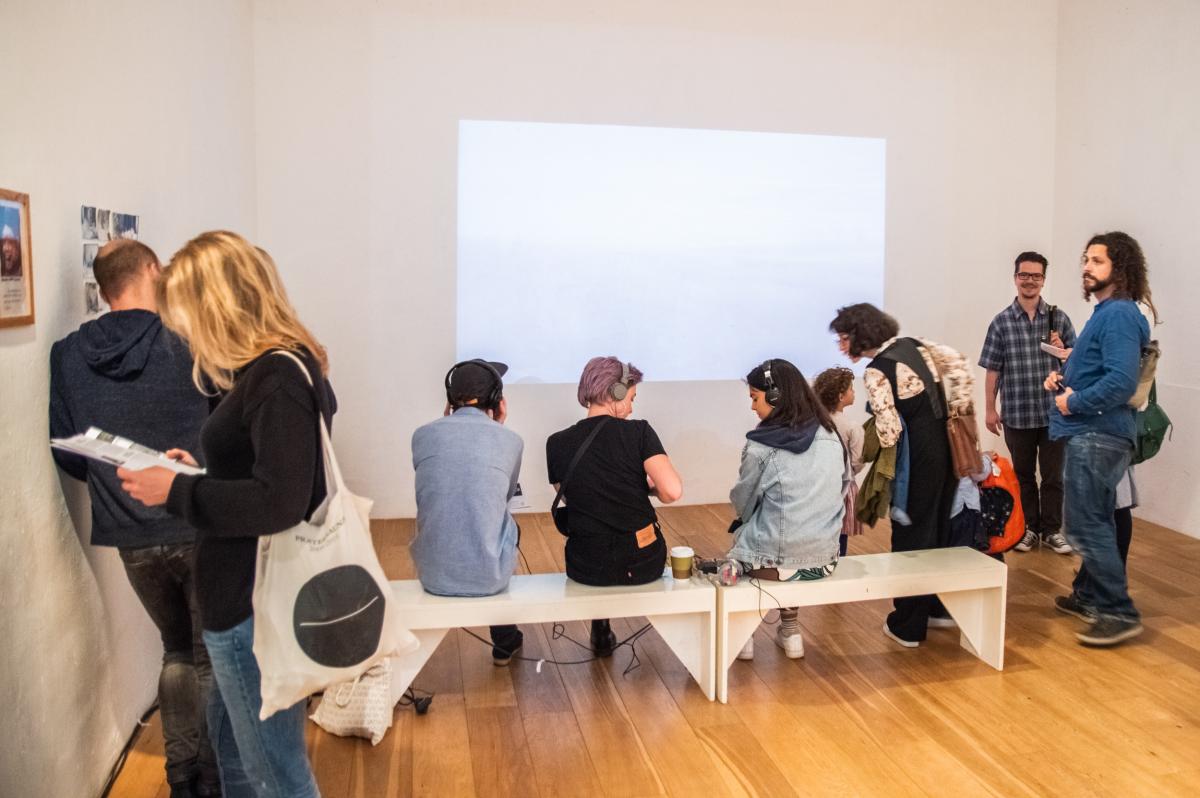 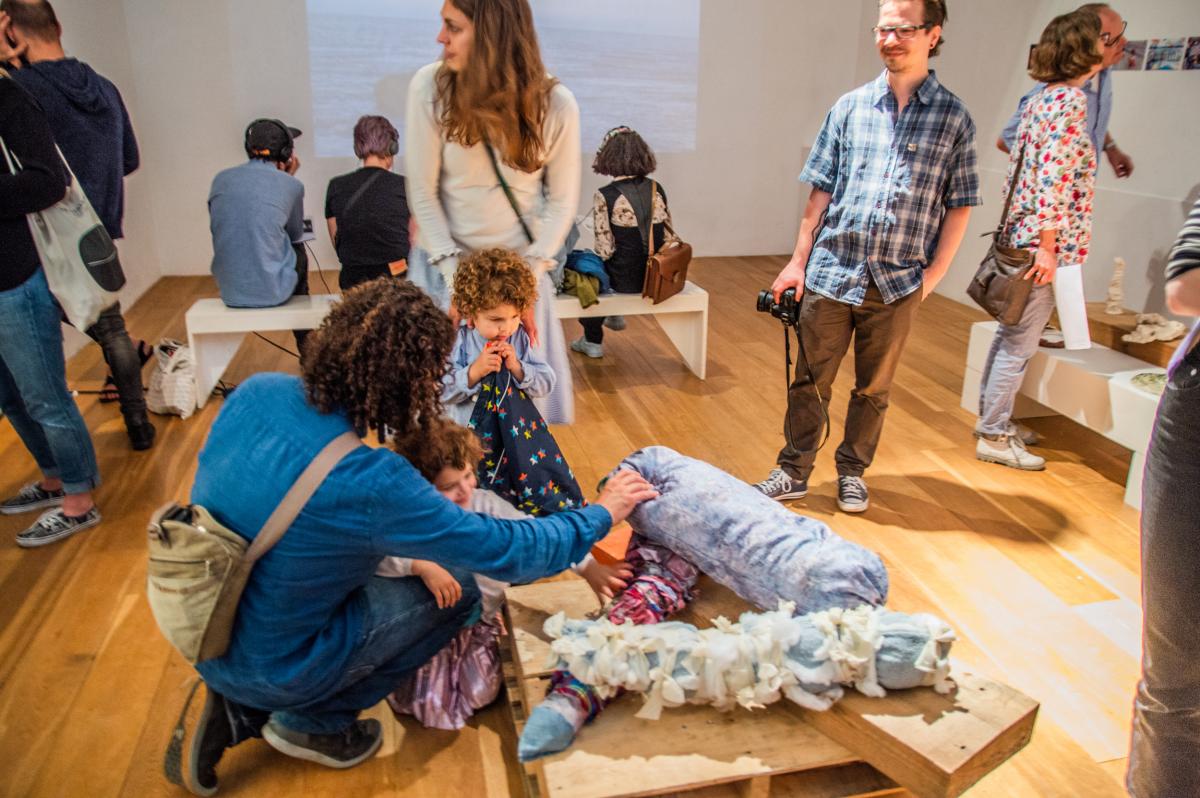 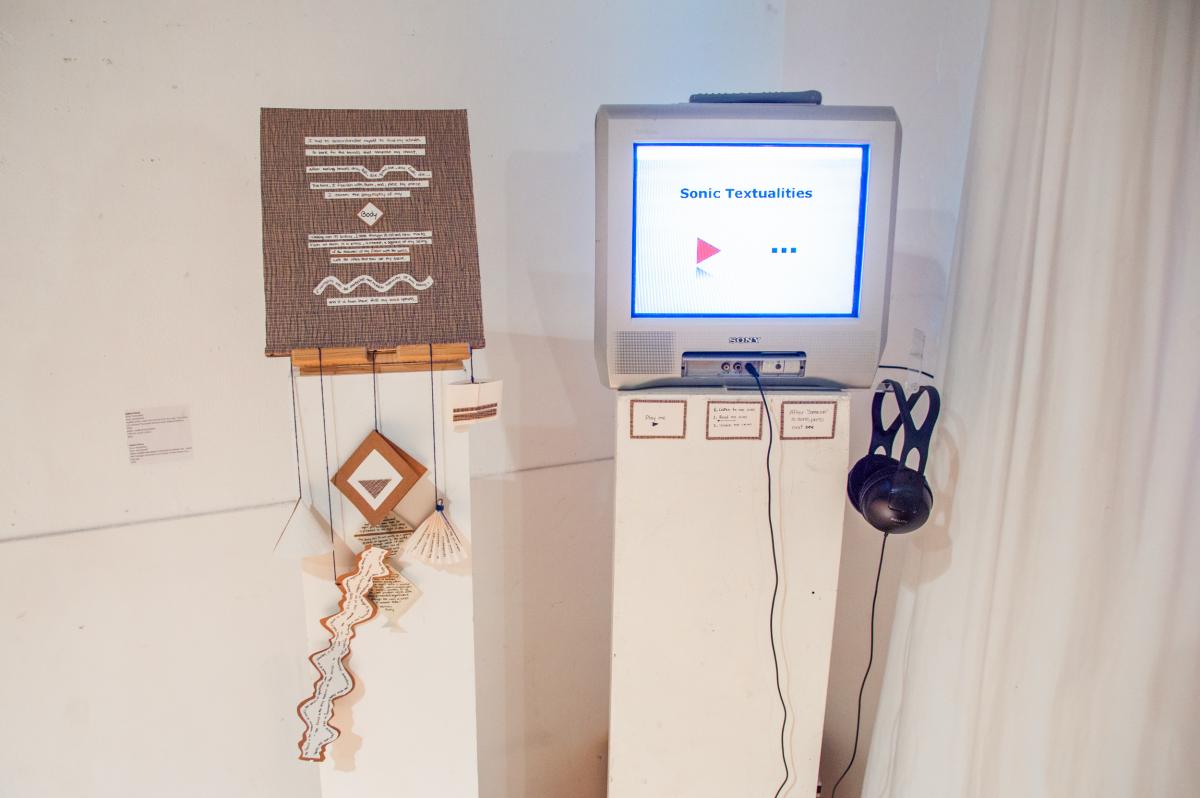 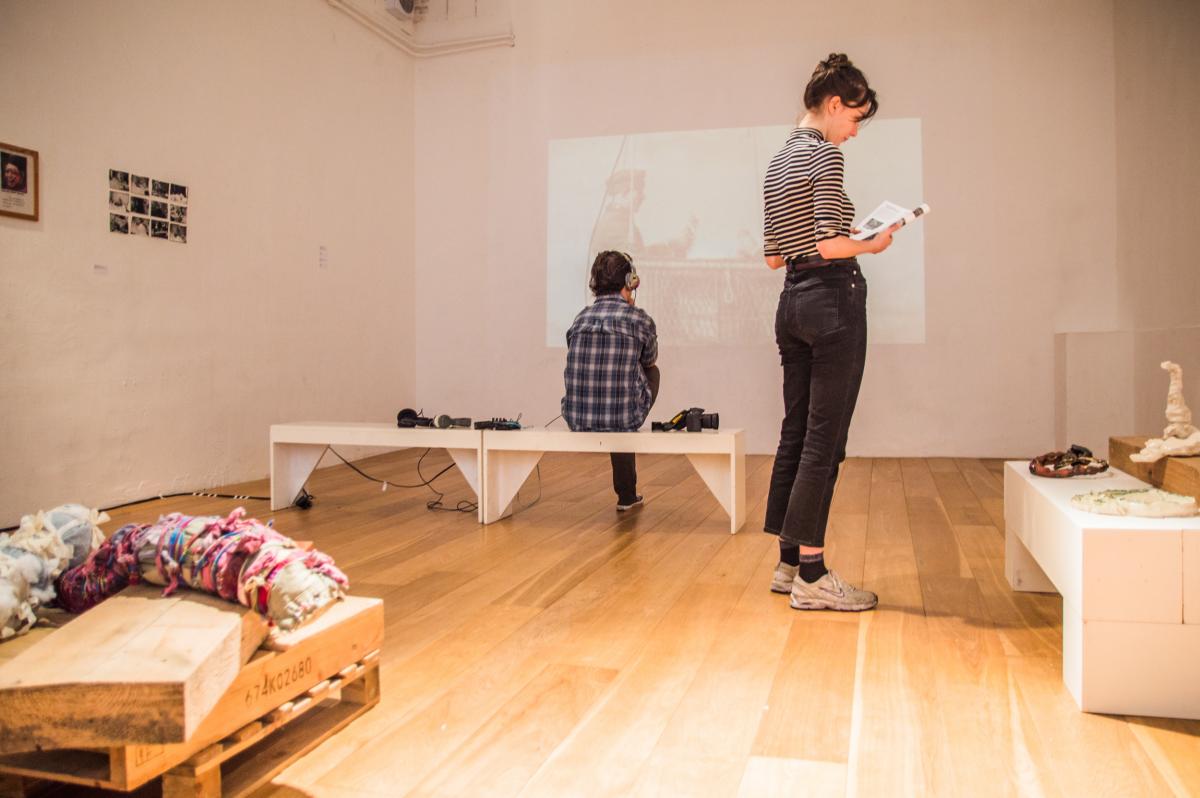 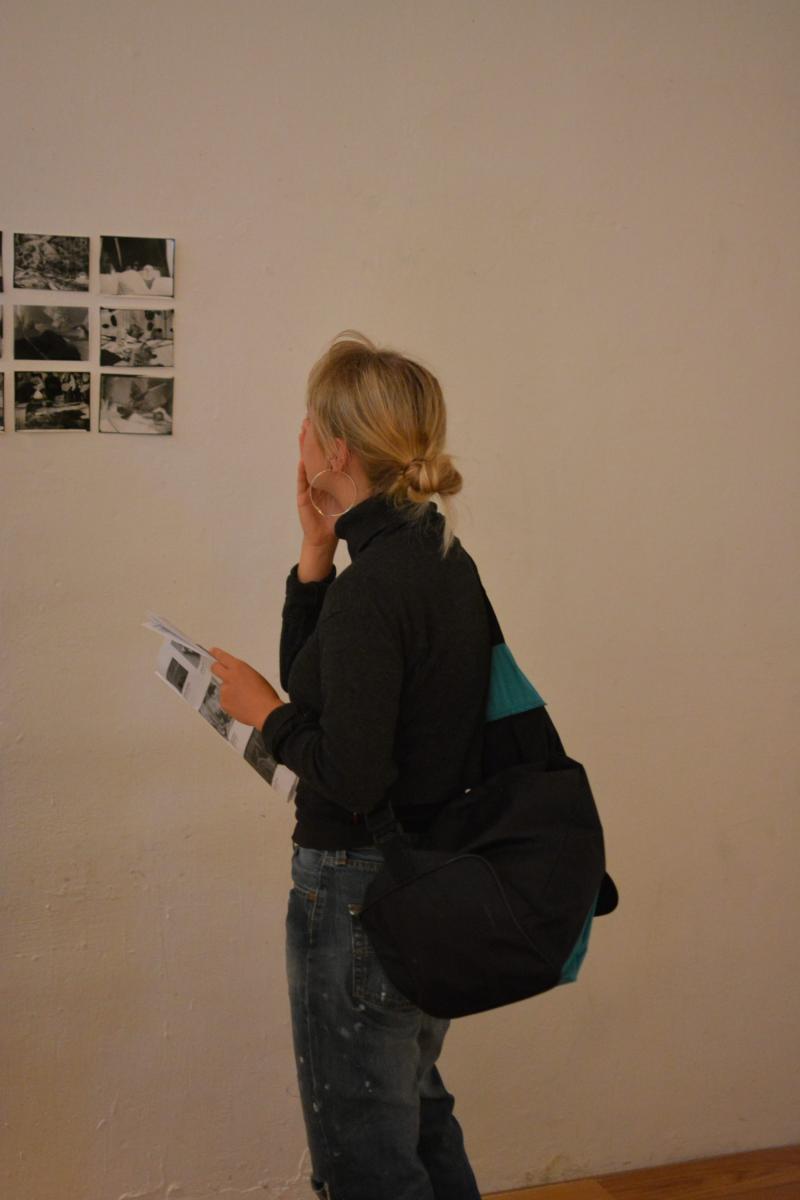 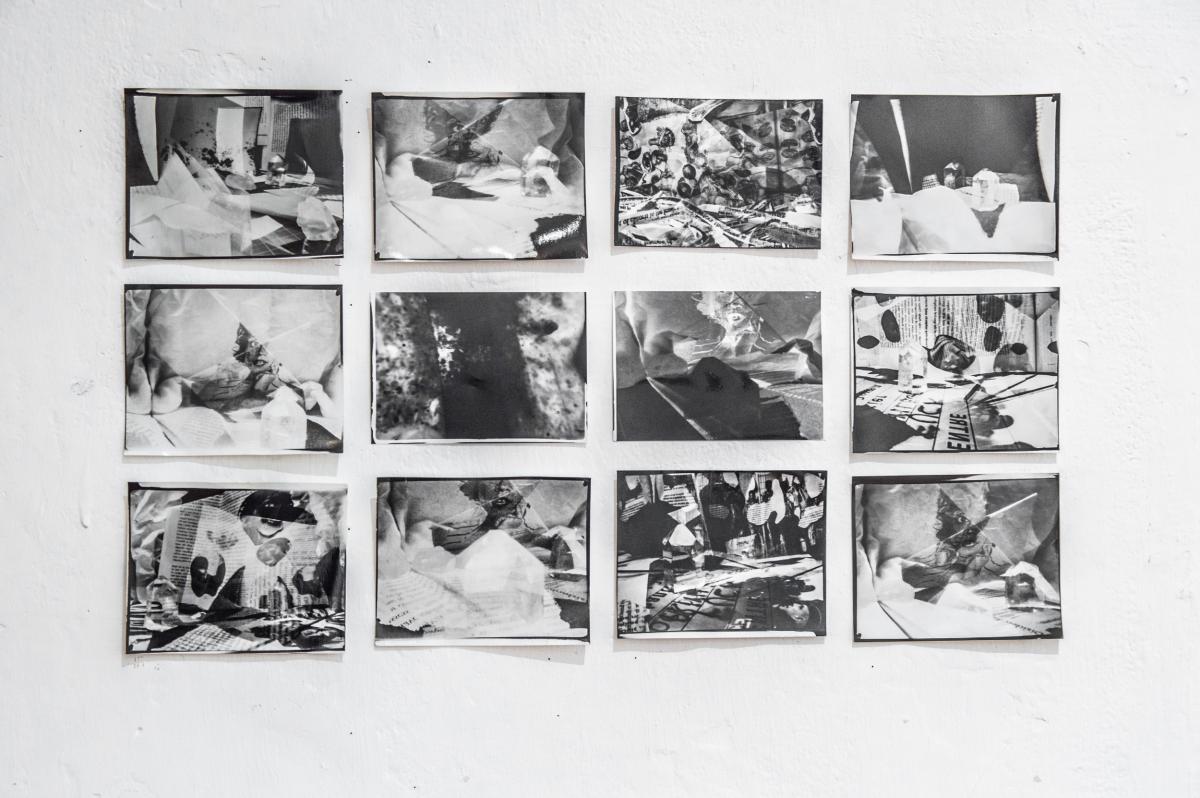 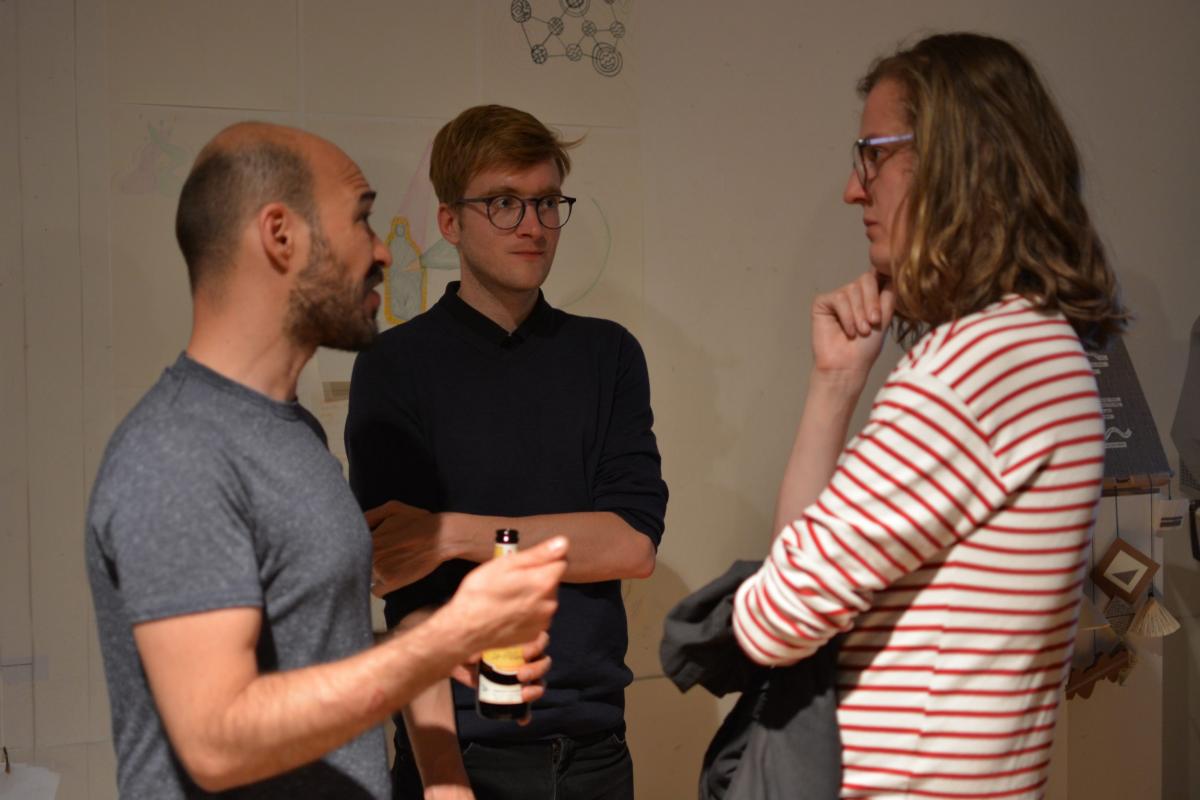 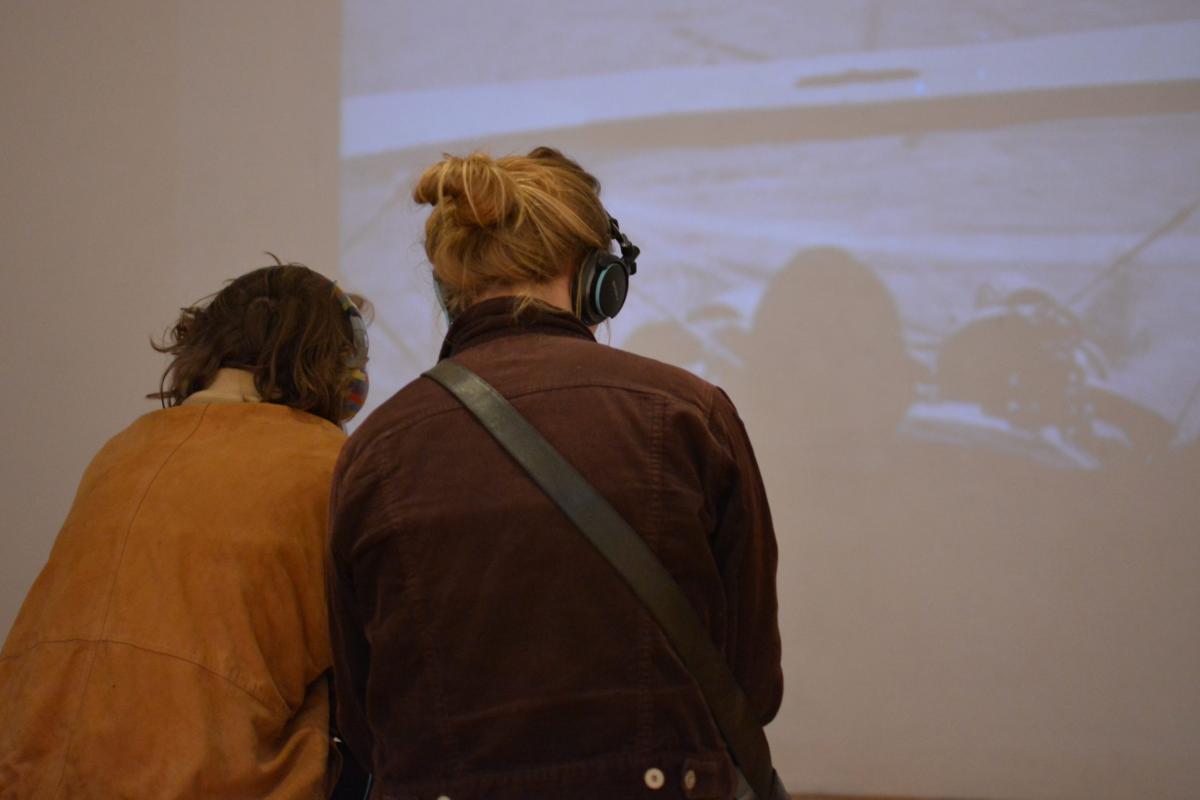 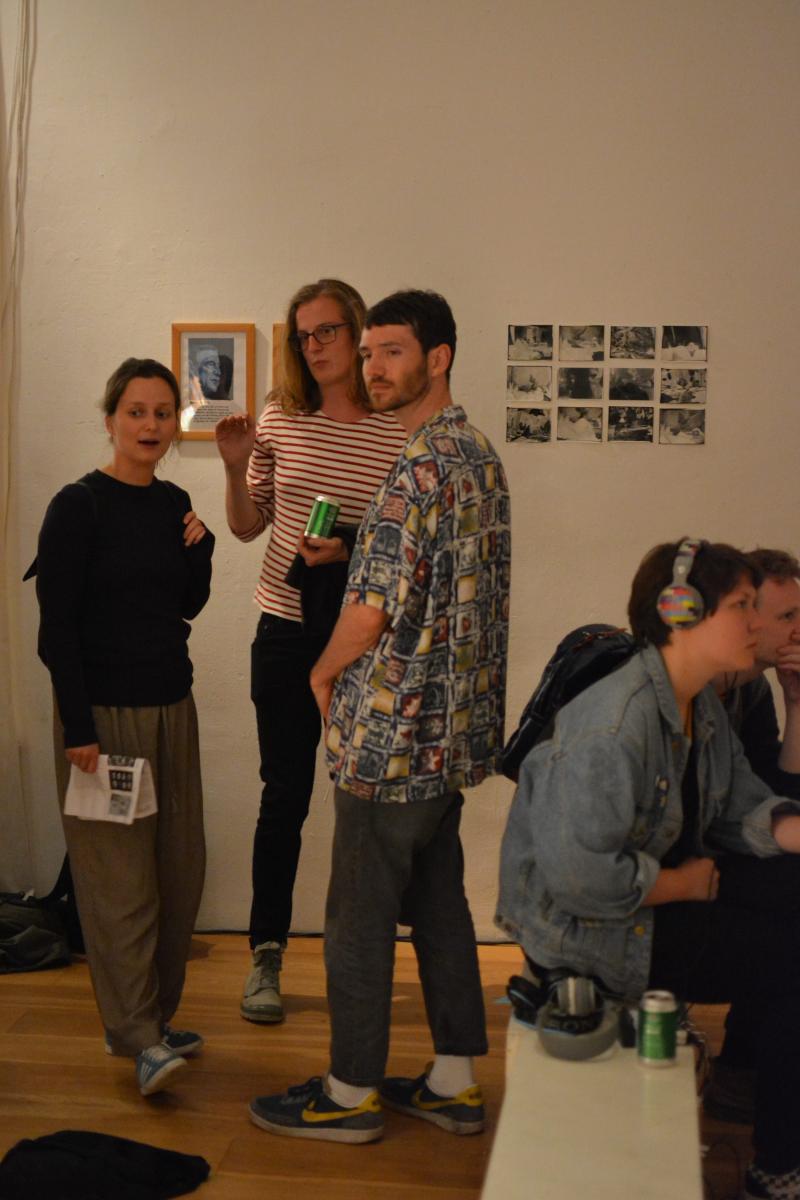 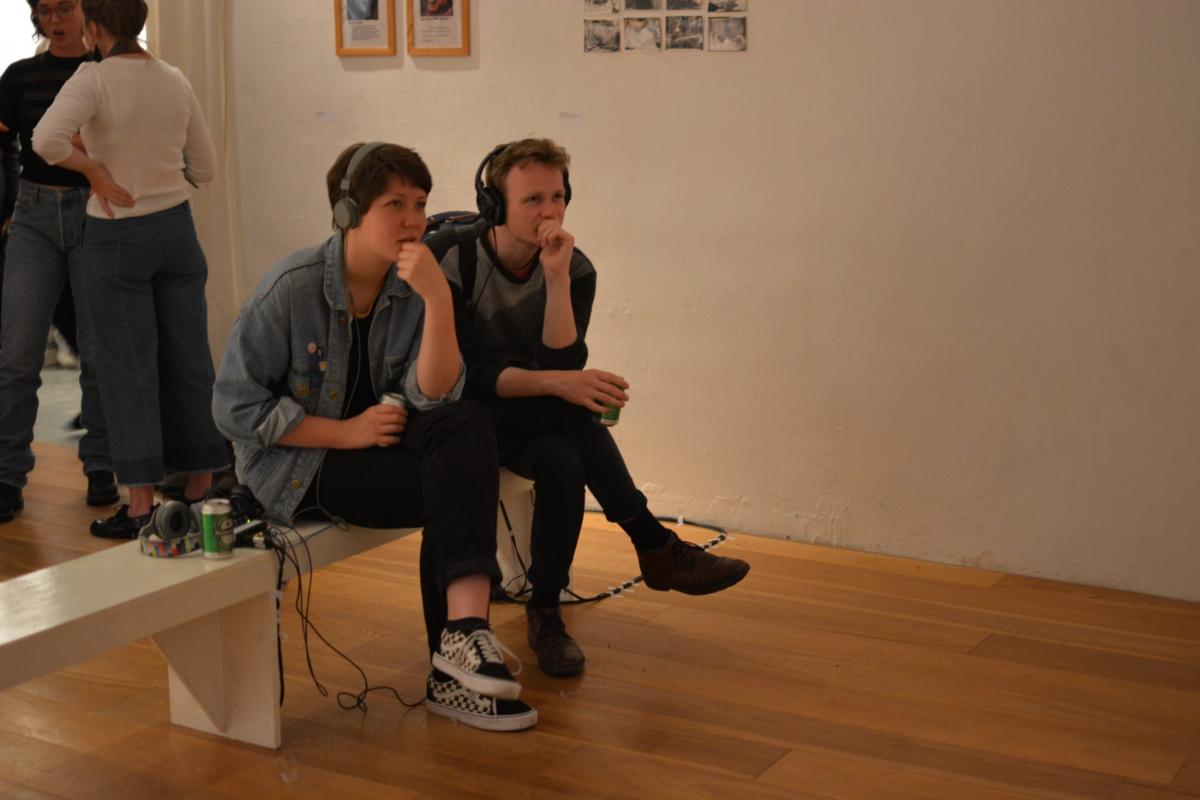 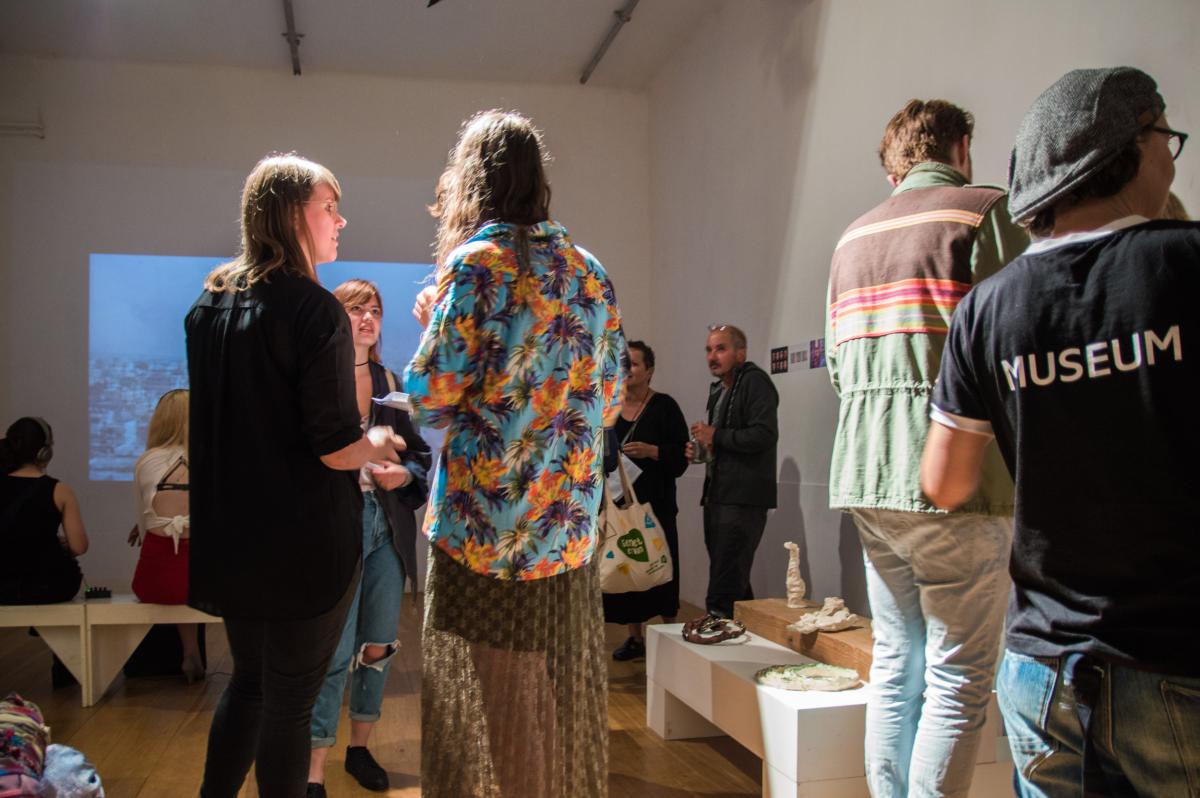 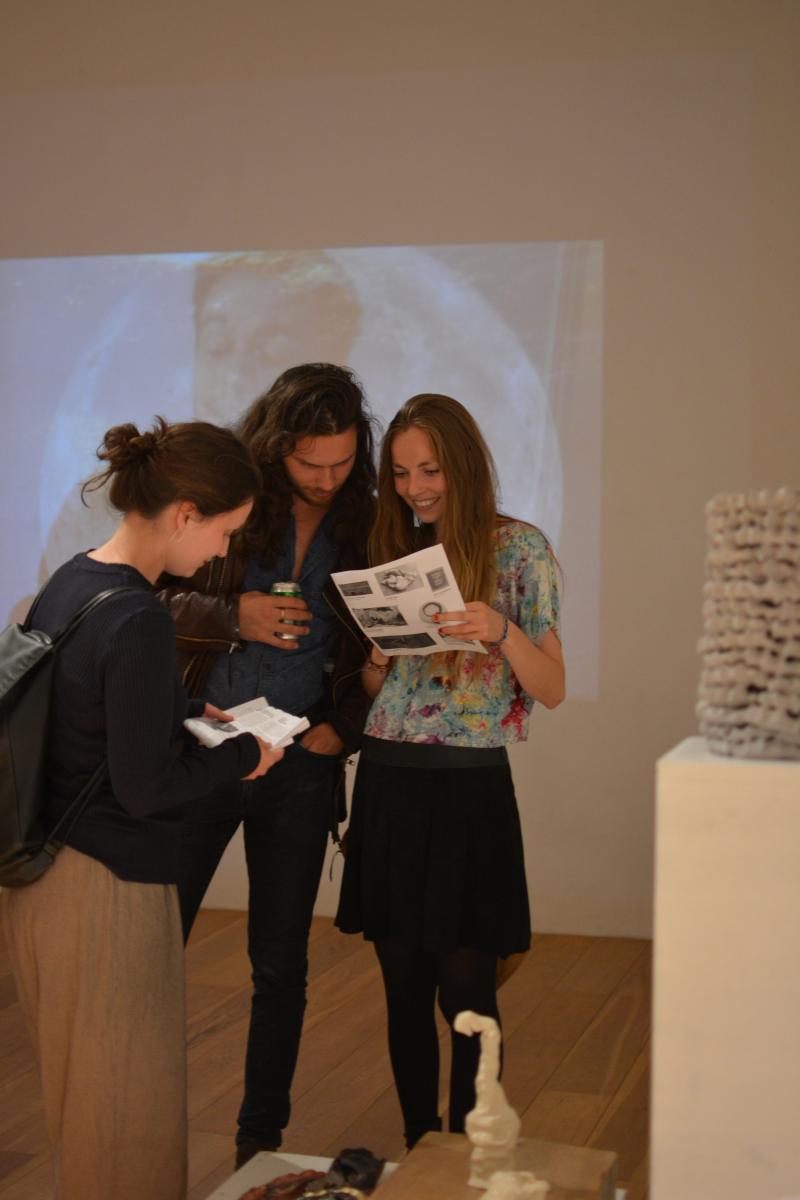 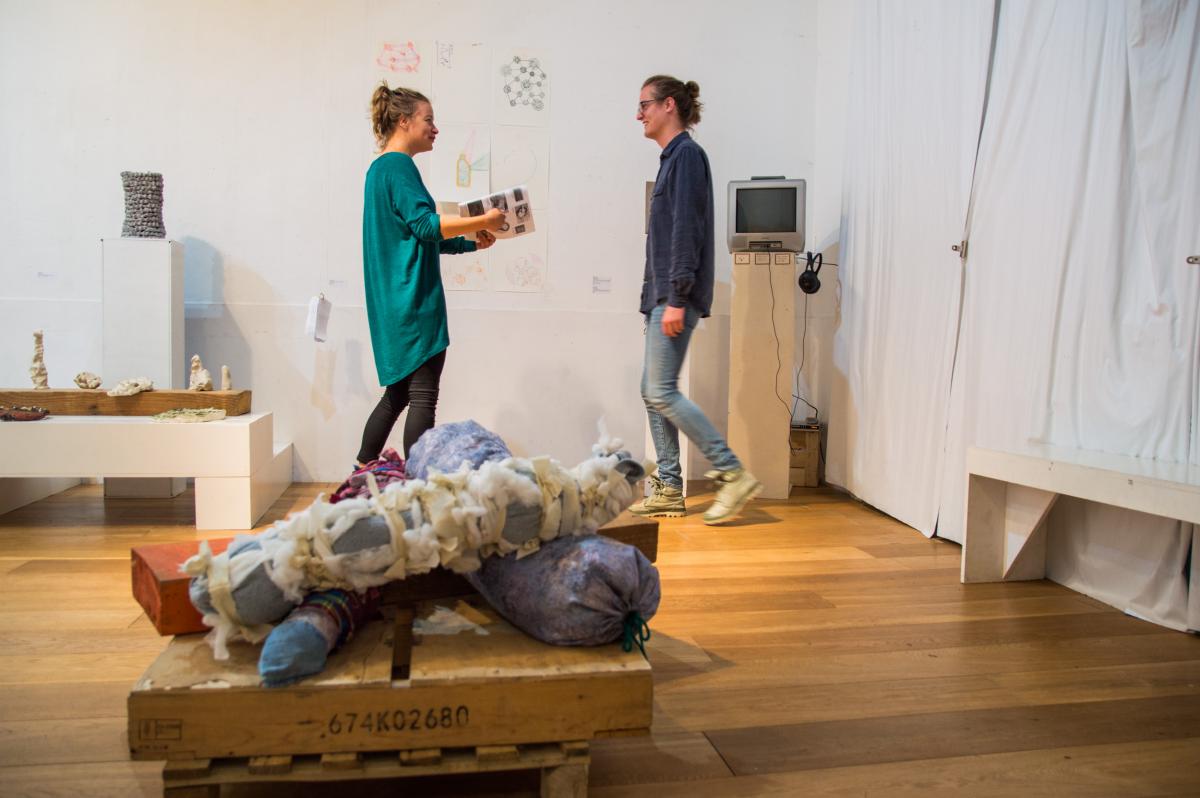